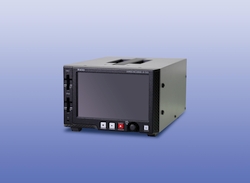 A portable video recorder that uses CFexpress as a recording media. This unit supports the recording and playback of 4K 120p images on a stand-alone basis, and by connecting multiple units, you can record and play video with any extended resolution and frame rate.

Slow playback is possible by changing the frame rate during playback.
*Does not play back in the same recording.

Looking for more information on this product? Check out our downloadable resources data sheets below:

All of our products in one place

Get a birds-eye view all of our amazing products.